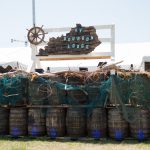 A rickhouse in Daviess County has collapsed. Which distillery? How many barrels of bourbon fell?

It isn’t known as to what caused the collapse, but nobody was hurt. It is thought the storms that came through last night might have something to do with the collapse.