Returning to the same building it once called home, Old Forester Distilling Co. opened to the public at 119 W. Main Street in Louisville, Kentucky. The $45 million, 70,000 square foot distillery will guide guests through the brand’s rich history and Bourbon making process of Old Forester, a brand sealed in history as America’s First Bottled Bourbon. 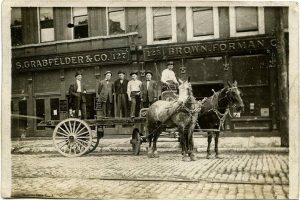 “Over the last 148 years, Old Forester has had its share of memorable moments and enduring accomplishments. Today marks yet another chapter to a story that has survived Prohibition, world wars and the changing palates and tastes of consumers across the globe,” said Campbell Brown, Old Forester President and Fifth Generation Brown Family Member. “We are delighted to now welcome friends old and new into our new, old Home.”

The distillery is the culmination of a nearly 150-year legacy that began in 1870 when George Garvin Brown, a young pharmaceutical sales rep, changed the spirits industry forever when he sealed whisky in a glass bottle. He signed his name – as a guarantee of consistency and quality, declaring “there is nothing better in the market.” It was an innovative approach at a time when whisky was commonly sold by the barrel. He set up shop on Louisville’s Main Street – dubbed Whiskey Row – the hub of the Bourbon business in Kentucky. 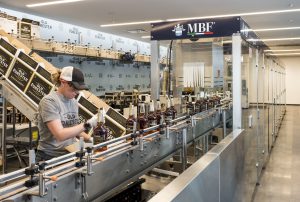 Old Forester Distilling Co. will add production capacity of approximately 100,000 proofgallons annually. Visitors will follow the Bourbon making process in an immersive experience that leads them from fermentation and distillation, to the on-site cooperage where handcrafted barrels will be raised and fired, then aged in an on-site maturation warehouse before bottling and shipment across the globe.

“As Brown Forman’s founding brand, Old Forester has stood the most difficult test of all…the test of time,” said Paul Varga, CEO, Brown-Forman Corp. “We are thrilled to open our doors today on Louisville’s historic Whiskey Row, inviting the world to a unique experience in urban distilling, brand and company history, and Bourbon hospitality.”

Distillery tour follows whisky’s journey from grain to glass
The tour experience at Old Forester begins with a primer on Bourbon history and the role played by both Old Forester and its hometown of Louisville, Kentucky. From there, guests follow the whisky’s journey through the distillery.

Four 4,500 gallon tanks guide guests to a glass elevator, where they ascend through a light-filled atrium in full view of the 44-foot-tall copper column still, designed and constructed by Vendome Copper & Brass Works in Louisville, bringing the distillation process to life. 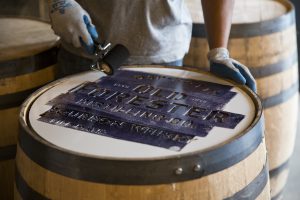 Guests then make their way to the cooperage. Brown-Forman is the only major spirits company to craft its own new barrels, and the process is seamlessly integrated into the new downtown distillery. Tour guests will look on as coopers hand raise each barrel and will feel the heat as they witness the charring of a barrel. In full view, barrels are tested and filled before making their way to the aging warehouse.

Down a charred, wood-lined hallway, guests are guided through the colors, flavors and aromas that whisky takes on during its time in a barrel. Unique to Old Forester Distilling Co., guests enter the on-site, three-story warehouse from the highest rack, offering a bird’s eye view. A catwalk leads guests down through the warehouse, where roughly 900 barrels will age.

Old Forester Distilling Co. joins eleven other distilleries as an official member of the Kentucky Bourbon Trail tour. Distillery tours will be offered seven days a week, with production Tuesday through Saturday 10 a.m. to 6 p.m.

“There’s a tremendous amount of pride – as a member of the Brown Family and a Louisvillian – in the fact that we’re able to return to this building and bring added life to a block that was once destined for the wrecking ball. It’s a true homecoming for this hometown Bourbon, which is entirely produced in the confines of Louisville,” said Brown.