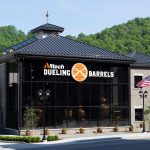 A bourbon barrel storage facility collapsed in Bardstown, KY at Barton 1792 Distillery around 11 am on Friday, June 22. Luckily, no one was injured in the collapse.

According to a Nelson County Emergency Management spokesman, about 9,000 barrels tumbled to the ground when half of a seven story rick house collapsed. There’s no official word yet from the company on what caused the collapse.

Aging barrels of bourbon, timbers and twisted sheet metal are what’s left after approximately half of a Barton Brands rickhouse collapsed Friday morning.

Friday evening, Amy Preske, a spokeswoman for Sazarec, Barton’s parent company, said the warehouse, No. 30, was built in the 1940s and held about 18,000 barrels of various distilled products of different ages. Half the structure still remains intact. Bardstown’s Fire Chief says the remainder of the building is unstable and at risk of collapsing too.

The immediate concern was the whiskey flowing into the streams. The rick house sits only 250 feet away from a creek that flows into Beech Fork River. The Environmental Protection Agency was contacted and arrived on scene just after 2 pm to assess the situation.

Just before 5 pm, first responders had just cleared the scene at Barton 1792 Distillery and retention ponds were being dug to secure the bourbon from further flowing into the creek.

Preske said it may be several days or weeks before a full assessment of the damage to the warehouse is complete.