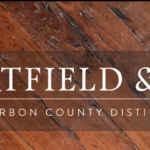 More Bourbon Barrels Than People in the State of Kentucky

Kentucky Bourbon is one of the Commonwealth’s most historic and treasured industries. According to the Kentucky Distillers’ Association, there are more bourbon barrels in the state of Kentucky than there are people. KDA President Eric Gregory said “The iconic industry is close to having two barrels of spirits for every man, woman and child in the state.”

Kentucky Distillers’ Association announced that the state’s aging Bourbon inventory has reached 7.5 million barrels, the most since 1972.

The industry generates as many as 17,500 jobs, has an annual $800 million payroll, and pours $825 million into tax coffers each year. The Bourbon industry is an $8.5 billion economic and tourist engine.

Hartfield & Co. Visits the Set of a Very Popular Show