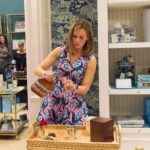 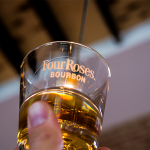 Prior to her current role, Van Tatenhove served as the first woman Commissioner of the Kentucky Department of Alcoholic Beverage Control, where she oversaw the regulation of the Commonwealth’s alcohol industry with its first-ever all-female Board. 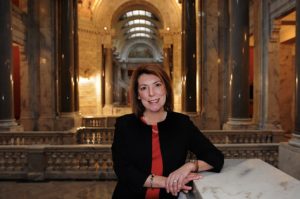 During her time as ABC Commissioner and the Speaker’s Office, she worked closely with the KDA and its members to advance significant pieces of legislation that have modernized the alcohol industry in Kentucky, including direct-to-consumer shipping in House Bill 415. Bourbon Women President Kerri Richardson and KDA President Eric Gregory commended Van Tatenhove for her exceptional commitment to promoting and elevating Kentucky’s iconic Bourbon and distilled spirits industry.

Richardson said that the Bourbon industry is indebted to Van Tatenhove for her skilled and savvy work in modernizing Kentucky’s archaic laws and Prohibition-era regulations governing the spirits business.

“She saw the barriers to an equitable playing field for Kentucky’s Bourbon industry and made it her mission to tear them down,” Richardson said. “Her guidance and advocacy helped our distilling businesses grow and serve consumers around the world. One day soon, when you’ve had a delicious bottle shipped directly to your home, raise a glass to Christy.”

In addition to leading the first all-female Board at the Kentucky ABC, Van Tatenhove was instrumental in providing guidance on the vintage spirits legislation in 2017 and House Bill 400 in 2018, the first shipping bill that allowed distillery gift shop visitors to ship bottles home.

KDA President Gregory said, “As a lawyer, Christy knows how to gather information from all parties before making decisions. Her methodical approach to modernizing alcohol laws can clearly be seen in her work drafting the shipping bill that is now a model for the country.

“Christy has spent countless hours learning about our legendary distilling industry and she
should be proud of her leadership toward opening the door to a new era for Kentucky Bourbon and Bourbon women” Gregory said.

The award is named for Lois Mateus, retired Senior Vice President of Brown-Forman, Inc., and the first woman ever to serve on the KDA Board. Her two-year term in 1992 paved the way for other women in high-ranking roles throughout Kentucky’s signature Bourbon industry.

“Thank you for honoring me. It is a privilege to be recognized alongside such exceptional and accomplished women, particularly Lois Mateus,” Van Tatenhove said. “But the real honor has been the opportunity to work with the KDA and those committed to growing and improving one of Kentucky’s signature industries.

“Together, we have opened markets and improved regulation. As a result, Kentucky’s distilled spirits community remains the envy of the world.”

Kentucky Speaker of the House David Osborne, R-Prospect, said he is extremely pleased to see Van Tatenhove receive the recognition she deserves, and he appreciates Bourbon Women and the KDA for honoring her.

“Christy’s impact on our state’s signature spirit is great,” he said. “As the first woman to serve as ABC Commissioner, she provided a thoughtful, common sense approach to regulatory oversight. As our staff point person on HB 415, her expertise was invaluable in crafting legislation that will serve as a national model and expand the industry’s market. Most noteworthy is the fact that her hallmark is an approach that values collaboration and seeks partnerships. While she is far from finished, her legacy is already great.”